St. Petersburg and the Rivers of Russia

Home/St. Petersburg and the Rivers of Russia
Previous Next

St. Petersburg and the Rivers of Russia

That sleek white ship sprawled across the photo above is our river cruiser, the MS Mstislav Rostropovich, on which we traveled for seven days down the rivers of Russia from the Neva in St. Petersburg to the Volga and Moscow. We have long wanted to visit Russia, but after learning of the miles and miles of red tape necessary to take a foreign vehicle like Romy into Russia, we decided that we had neither the time nor the patience to see it through.  So instead we took Romy back to her ‘winter’ home in Dulmen, Germany in late August, took a high speed train to Frankfurt International Airport, and flew straight to St. Petersburg.

While our river cruise included a day or two in both St. Petersburg and Moscow, we wanted more time in both so we arrived several days early in St. Petersburg and spent a couple of extra days in Moscow. This way we had a total of twelve days in Russia.  We knew that this could be nothing more than a whisper of Russia’s full throated presence, by taking to the rivers between cities we at least had some sense of the enormous ‘back country’ that stretches across the northern regions of Asia all the way to the Pacific.

But let’s begin with what in many ways is the polar opposite to the vast and endless forests—the splendor that is St. Petersburg.  Set on the Neva River close to the Baltic Sea by Peter The Great in 1703, it was the capital of Russia for over two hundred years and represents perhaps the world’s best case for planned urban development.  It is almost incomparable for its splendor and graciousness, and as testimony to the wealth of the aristocratic class, is adorned with over 160 palaces lining its streets and canals.

Most famous, of course, is the Winter Palace, built under Peter’s direction and residence of the Russian rulers until the Bolsheviks arose in 1918.

It is now part of what is called the State Hermitage Museum which really encompasses a series of additional gracious and historical buildings along the riverfront. The General Staff Building, opposite the Winter Palace across the broad and stately plaza you see above and below, is also of immense size and today houses part of one of the greatest art collections in the world, though all of the buildings within the Heritage complex contain parts of that collection.

But it is the Winter Palace itself that is the focus and greatest single attraction in St. Petersburg, and it is so sprawling and elegant that it inevitably leaves its visitors stunned and staggered by its opulence and splendor.  Here, for instance, is the Gold Hall, a ballroom within the palace used for parties and galas but also as a throne room where the tsars often met important visitors.

Below is part of the Raphael Loggias, a long corridor adorned on every surface.

It was commissioned by Catherine The Great in the late 1780’s and is an exact replica of the Gallery in the Papal Palace in the Vatican City.  The originals were painted from sketches drawn by Raphael, and a team of artists went to the Vatican and spent years making copies of it all.  The ceiling is adorned with paintings of Biblical scenes, the walls with ornamental designs and the floors of exquisite marble mosaics.

The Small Throne Room, or Peter The Great Memorial Room, is an example of a rather minor room but nevertheless flawless in its execution.  Here the tsar would meet diplomats on New Years Day to accept their good wishes for the coming year.  The throne itself, constructed in London in 1731, is made of silver gilded with gold.

Peterhof, the Summer Palace for the tsars, was begun by Peter in 1705 but took decades to complete. About twenty miles from St. Petersberg, he considered it a strategic location from a naval point of view, and it is most famous for its fountains and gardens, modeled after the gardens at Versailles in France. The Grand Palace is beautiful as well, and from it plunges the cascade and sixty-four fountains, as sensational as any we have ever seen. All are fed water under pressure only from gravity and without the use of pumps, and represent one of the great technological achievements of the period.

The fountains and cascade contain many gilded figures and manages to thoroughly soak almost everyone who comes close.

Viewed from above and immediately in front of the Grand Palace, one can see the gardens stretching out to the Bay of Finland, just visible in the distance.

It was here, in a much smaller palace more the size of a comfortable house, that Peter spent most of his time designing, planning and developing his many interests and accomplishments.

In the heart of St. Petersburg, through what is today a lovely pedestrian street and behind a massive statue called The Bronze Horseman, sits St. Isaacs Cathedral, the largest in all of the Orthodox world and the fourth largest in interior volume in the entire world.  First place, by the way, was recently claimed by the Cathedral in Sevilla, Spain.

Begun under Tsar Alexander I in 1818, it took forty years to complete and sits atop 25,000 wooden pilings which were driven into the earth to keep it from sinking under its massive weight.

But certainly the most stunningly colorful and beautiful of the churches of St. Petersburg is the Church of the Savior on Spilled Blood.  We loved the color, cupolas and drama of its exterior, which approaches the level of a fantastic cartoon.

It sits beside the Griboedov Canal, itself lined with those elegant buildings which seem to make up all of St. Petersburg, on the spot where Tsar Alexander II was killed by an anarchist bomber in March of 1881. The church itself was built as a memorial by Tsar Alexander III to his father and is filled with 7500 square meters (almost 75,000 square feet) of mosaics, most of biblical scenes but framed elegantly as well and everywhere encrusted with gold.

Across the Neva River from the Hermitage lies the St. Peter and Paul’s Fortress, the first structure built in St. Petersburg when Peter The Great began it all.

While still a military installation, over time it has also served as a school and a prison for political opponents who would simply disappear into it, never to be seen again.  It also surrounds the Cathedral of Saints Peter and Paul, built between 1712 and 1733.  Its bell tower, containing a carillon of 51 bells, can be seen reaching above all else to a height of 404 feet in the photo above, and it is topped with a golden angel holding a cross.  But most importantly, it is the burial site of almost every tsar of Russia, from Peter The Great to Nicholas II, the last to rule.

The interior is filled with sarcrophagi, tombstones and memorials to the dead,

and seems to be perpetually filled with visitors–mostly Russian–to this, the final resting place of the Russian Empire.

We had four wonderful days wandering St. Petersburg before we boarded our riverboat and set out down the rivers to Moscow, far to the south. But even in that short period we felt everywhere the strong support for Putin among the people, only reinforced and amplified when we reached Moscow. Certainly in part this is their response to and participation in their long history of being ruled by authoritarian figures leading a powerful and dominant country, from the tsars to the Communist dictators who followed.  So we found glorifications of Putin everywhere.  Our favorites were the tee shirts with him pictured astride a bear, a rifle slung across his back!

Our riverboat was relatively small by comparison to many we saw, since it carried only 120 passengers. It had been refurbished about five years earlier, and was quite gracious and well maintained and staffed, and our room included a balcony from which we could sit and admire the forested landscape we travelled through. The itinerary called for stops at four villages between St. Petersburg and Moscow, but because the wind was so strong and the waves so large, we could not venture out into Lake Onega. As a result, we were unable to visit the renowned Kizhi Church of the Transformation, famous for its 22 cupolas and long recognized as one of the most amazing wooden structures in the world. This was quite a disappointment, since it was one of the sights we had most looked forward to visiting.

After an overnight voyage from St. Petersburg we arrived at Mandroghi, a reconstructed 18th century village and something of an arts and crafts center. You might notice the wooden building behind the traditional samovar which housed a number of artist studios.

Most of the population lives in small wooden houses, and what often occupied their front lawns was testimony to their closeness to the river and its life as well.

We visited almost all of the artists while there and found that many spoke English.  This artist makes everything of birch as does her husband who works with her, under the watchful eye of their young apprenticing daughter.  Birch seems to be an important wood for the whole region, since the beautiful plywood we used in building our guesthouse in Santa Fe came from the same area of Russia and was called ‘Baltic Birch.’

Mandroghi is also home to the Vodka Museum with over 3500 brands of vodka on exhibit and for sale!

Here are a few of our favorites, including one featuring Che Guevara on its label.

We next motored downstream to Goritsy, site of the Monastery of St. Cyril of the White Lake, a 14th century abbey and one of the best preserved of Russia’s remaining medieval churches.

Its fortifying walls are 2400 feet long and 22 feet thick in places,

and surround almost all of the town, which is accessible through an imposingly frescoed gate.

Soon after entering the famed Volga River, we spent a morning exploring the village of Uglich, made famous as the site of the murder of Prince Dmitry, son of Ivan The Terrible, and likely killed by his father’s forces. On that very spot was built the Church of St. Dimitry-on-Blood, beautiful in it colors and proportions.

Uglich seemed filled with churches, and here are a couple of our favorites from our walk around town.

Uglich was our last stop before reaching Moscow, though most of our time on the rivers was spent in the vast forests which line them everywhere.

And that landscape made probably the strongest impact on us of everything we saw in Russia. Perhaps if we had not spent so many years in Europe we would have been truly staggered by the beauty of St. Petersburg.  But it was the seemingly endless forests sprinkled with small villages of people trying to scrape a living in and from the harshest conditions imaginable that left the strongest impression.  This was only amplified by the sense that for them there is no real path from a life not significantly different than what their ancestors had as serfs or slaves for hundreds of years before.

And the immensity! The sense of geographic reality that when we looked to the eastern bank of the river, we knew that those deep forests stretch uninterrupted by only the Ural Mountains through nine time zones all the way to the Pacific Ocean. This was the epiphany we took with us from Russia.

Want to see a bit more of St. Petersburg and the Russian Rivers? Click on the photo below. 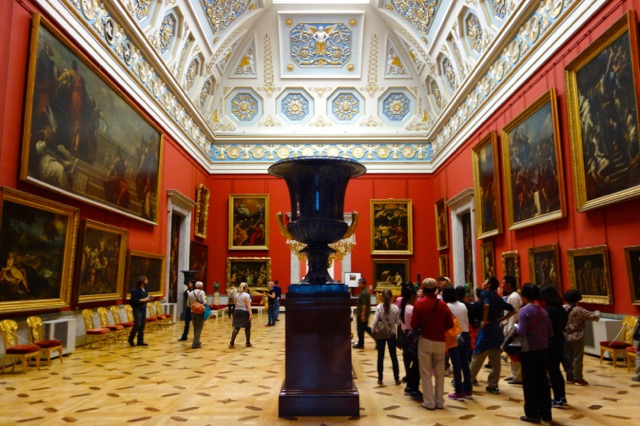