Leaving Lisbon and Sintra behind, we jumped on the motorway and headed back down south as fast as Romy could take us. Our intention was to follow the Atlantic coast from Cabo de Sao Vicente–the most western point on the European continent–as far north as we could manage before commitments would pull us away and back into central Europe.  That is exactly what we did, and we found that coastline to be among the most beautiful we had ever experienced.  A big part of that coast  is entirely within the Parque Natural Da Costa Vicentina, a huge national park that crawls inland for at least ten miles for most of its length.  There are occasional small fishing villages scattered along its water’s edge and connected for over two hundred miles by a nearly continuous hiking trail called the Roto Vincentina.  Most of the park is dense pine forest down to spectacular bluffs overlooking the turbulent, violent Atlantic Ocean below.  The fishing continues,  as this old timer exemplifies, not far north of the Cape itself and from perhaps three or four hundred feet above the surf.

So much of this coast is high bluffs with beautiful and nearly deserted beaches sprinkled in its path. Here is a very typical view as we free camped along its length.  Note the fisherman, and that white blob in the distance is Romy after a dreamy night of sleep with the sound of the sea.

In addition to the spectacular beauty of the sea, the color of the bluffs themselves were lovely, shading through blue to yellow to even orange and always with the turquoise of the sea pounding below.

Did you notice the storks sitting in their huge nests and perched high above the sea?  No?  Here’s a view that makes spotting them a little easier.

While most nights were spent camping for free high on a bluff somewhere along the coast, we did also venture into town occasionally and spent a couple of nights in Foz do Arelho, situated beside not only the sea but a lovely lagoon that reaches inland.  Both have beaches lined with lovely walkways,

and drew quite a crowd of other camper vans to the lagoon side, bathed in sunset and ready for the night.

The sunsets were just so spectacular no matter where we were.  Every night was a light show which stretched across the whole of the horizon, and always changing, evolving.

Now we don’t want you to think that all we did was lounge around on the coast soaking up sun and sunsets.  We did venture into some pretty spectacular cities, to which Aviero is testament.  Situated south of Porto and in the midst of a series of coastal lagoons, it had a long history as a major port until its river silted up, and then later became the focus of huge salt flats and kelp fields.  The salt and kelp were harvested and brought to town in the sort of boat you see at the top of this posting. In those days, however, they were without the colorful decorations which adorn them today as they ply the river and canals, their cargo now visitors enjoying this lovely town.

Dave had his own particular favorite and insisted on riding in it.

And like a number of other cities sprinkled across Europe, Aviero has many buildings in the Art Nouveau style.  The Tourist Information Office is in a particularly fine example, and its front door is elegant in that curvilinear, yet uncluttered style.

Leaving Aviero behind we traveled north to Portugal’s second largest city, Porto.  Famous for the after dinner wine that takes its name from this city, it has been since Roman times a major trading center.  It lies at the mouth of the Rio Douro, long famous for its serpentine beauty and the grapes which seem to grow everywhere along its sides.   Like so many European cities, Porto climbs a hill with a cathedral on top. Working class apartments are close to the river, and the more spectacular and splendorous structures appear as you progress upwards. Most were built as the homes of rich merchants from prior centuries.

Like so much of Portugal, it is home to many azulejos, the fabulous ceramic tile walls seen everywhere.  Much of the style evolved from the 16th century going forward, particularly when an Italian technique made it possible to paint whole images onto the tiles without fear of it running when applied.  Thus the best of them are grand scenes, often religious or historic, as is true in the train station in Porto.

In spite of the hustle and bustle of the city, even on a Tuesday there was time–and space–to stretch out on some green grass and grab some sunshine.

We also heard a lot about the beauty of the Rio Duoro and drove a good part of its length on a narrow, twisting road which follows high on its shoulders.

Finally leaving Portugal–very reluctantly, we might add–we continued north back into Spain, and went first to Santiago de Compostela, that famous pilgrimage site, then on to Santander and San Sebastian before diving south to the small town of Espinal where we managed to meet up with our friends Mike and Terri Church.  They are friends from Mexico days and are famous for their many camping guides, particularly for Alaska, the Pacific Northwest, Europe and Mexico.  The latter is the absolute bible of camping in Mexico and was our daily bread for years before we finally met them in the campground in San Miguel de Allende.

Terri and Mike were walking the Camino de Santiago, the long, arduous and historic foot trail which has for centuries been a pilgrimage route to Santiago de Compostela, that almost holy city in the northwest of Spain.

They had been walking for a couple of weeks in France and had just crossed into Spain several days before we met up with them, yet still had about 450 miles to Santiago.  When we saw them, they were walking about ten or twelve miles a day and stopping at night in hostels and inns which are in each village specifically for pilgrims.  Near the end they were doing eighteen to twenty miles a day, and enjoyed it so much that they went on beyond Santiago to the sea out of the pure joy of walking.  We had breakfast with them before they set off again.

Heading north as we were, we had the Pyrenees mountains between us and the rest of Europe, so on the advice of nephew Eric, we spent a couple of days driving through and enjoying them–much grander than we had anticipated and still covered with snow in early May.

This path also led us through Andorra, a mini country which straddles the Pyrenees and is renowned as a trading center if nothing else.  Possessing almost no charm, wedged between mountains in a narrow canyon, and awash with cigarette and liquor stores, it is the kind of place one imagines arms deals being negotiated.

We happily escaped it the next morning and found ourselves plunging down the northern slopes of the Pyrenees and again in France.

We had lots of road ahead of us as our plans were to meet grandson Cameron in Prague and then friends Jeanne and Tony in Norway, and we only had three weeks to make it!
Hungary to see a few more photos? Just click on the photo below! 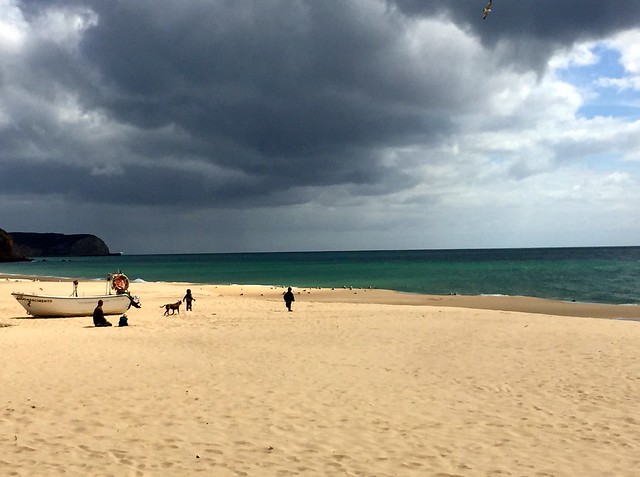