Moscow: Capital of the Russian Federation

Home/Moscow: Capital of the Russian Federation
Previous Next

Moscow: Capital of the Russian Federation

Above is the famed Novodevichy Convent at night from across the lake that, in the dead of winter, becomes a skating rink and was a favorite of Tolstoy’s when he lived in the neighborhood.  The convent itself has a long history dating from its founding in 1524.  Over the centuries it acquired considerable wealth through gifts of the royalty and aristocracy so that at one point in its history, in 1744, it owned 36 villages and their 14,489 serf inhabitants.  Its oldest and most central structure and is the Cathedral of Our Lady of Smolensk with its five domes

and amazing frescoes and gilt inside.

From early on it also provided a convenient place for Tsars and other important personages to stash away unwanted wives and those women viewed as enemies.  Even Peter The Great had his first wife and half sister put away here, so in effect, it served long and faithfully as a soft sort of women’s prison for the aristocracy.  Its cemetery has become something of a burial ground for the famous and powerful and now holds the remains of Chekov, Gogol, Prokofiev, Shostakovich, Stanislavski and Rostropovich from the literary, musical, and dramatic side of fame, and Boris Yeltsin and Nikita Khrushchev from the 20th century political world.

But the focus of Moscow is, of course, the Kremlin and it dominates everything else in the entire city. We had always thought that the most prominent feature of the Kremlin was probably Red Square with St. Basil’s Cathedral at its end, but when seen from afar—as, for instance, from a bridge downstream over the Moscow River—it is the Grand Kremlin Palace which dominates.

And when one looks to the Kremlin from the same location at night, its dominance is only accentuated.

The palace was built between 1839 and 1849 and was to rival the Winter Palace in St. Petersburg for size and opulence, for it contains over 700 rooms.  Now it is the official residence of the Russian president, that Putin fellow, though he apparently rarely stays there.  It is still used for many splendorous occasions and is also filled with offices for much of the highest levels of the Russian Federation government.

More familiar to most foreigners are the walls that surround the Kremlin, over 7000 feet long in total and often as thick as 21 feet.

In addition to providing a defensive shield for centuries, it is now also the site of burial for some of the most celebrated of Russians, the Cosmonaut Yuri Gargarin probably being the most familiar to Westerners.

Most visitors enter the Kremlin from a grand plaza which spreads out around a statue of Marshall Zhukov, a great hero of WWII, astride his horse.

The main entrance itself is a bit of a squeeze between buildings with the usual and appropriate security measures.

Once inside one is standing in the famed Red Square, and immediately to the left is the huge GUM Department Store.

Those of us old enough can recall those stories of the Cold War period when the shelves in GUM were empty not only of clothing and jewelry but even of food.  Now it is absolutely spectacular, filled with everything imaginable, and as a structure, certainly as grand as a palace.  We had lunch inside and shared a table with a lovely Kurdish student at Moscow University from the far south of the Federation and who spoke nearly perfect English.

From everything we have read, there is nothing in all of Russian architecture its equal.  Built between 1555 and 1561 on orders of Ivan the Terrible, Dmitry Shvidkovsky, in his book Russian Architecture and the West, states that “it is like no other Russian building.  Nothing similar can be found in the entire millennium of Byzantine tradition from the fifth to fifteenth century…a strangeness that astonishes by its unexpectedness, complexity and dazzling interleaving of the manifold details of its design.”  Now a World Heritage Site and a State Historical Museum, it only occasionally holds religious services.

Contrary to the bustle and crowds of Red Square, a quiet corner is called Cathedral Square and surrounded by magnificent churches.  The Cathedral of the Annunciation, built between 1484 and 1489, stands adjacent to the Grand Palace and was long the personal chapel of the tsars and their families as well as being the site of their marriages and baptisms.

Also in the square is the Cathedral of the Dormition, on the left, and the Ivan The Great Bell Tower to the right, formerly the tallest structure in all of Russia.

The square was the scene of royal coronation and funeral processions for all the Russian Tsars, Orthodox Patriarchs and Grand Dukes of Moscow.

Let’s just take a minute to show you one last church in Moscow since its history is an interesting one. The Cathedral of Christ the Savior was first built in the nineteenth century and took almost forty years to complete.  But in 1931 Stalin ordered it destroyed and it was leveled to the ground.  In 1995 to 2000, however, with work continuing around the clock, it was rebuilt and stands today, the tallest Orthodox church in the world.  It was also the site of Pussy Riot’s infamous performance which ended them up in prison.

Once away from the grandeur of the Kremlin and the few buildings of historical value scattered throughout what was ‘old’ Moscow, there is little to distinguish it from any other 21st century megacity.  It too is filled with traffic congestion and smog, its attention taken by the push for wealth and what it can purchase.  There are lots of Bentleys on the streets and everyone seems to be hustling to ‘get ahead,’ perhaps a bit more difficult without the right connections in an economy controlled and exploited by those who have them.

But there is a bright side to even this, as we found in what is called “New Moscow City,” an area of glamorous new buildings which seem to mimic Dubai as much as anywhere we have been.

This is most obvious in the twisty building which stands out from all the rest.  Here it is in daylight,

and again at night when its lines are even more dramatic.

We were more taken in our nighttime prowl by that classic building from the Stalinist era, the grand and imposing Moscow University, still impressive as it sits illuminated and stately.  In addition to holding classrooms and labs, it also furnishes dormitory space for several thousand students.

Ironically directly behind us when Bonnie took the photo above was a huge gathering of perhaps a hundred motorcyclists, all with gloriously shiny oversized machines and often adorned with blond beauties along for the ride.

These bikes are a long, long way from the scooters lining the streets of Florence or Sevilla! The one in front is powered by a V-6 engine!

Finally, we have to take you underground to what is one of the great achievements of the Soviet period and is still the subject of so much wonder—the Moscow Metro.  Just for starters, this meant descending what was the longest escalator we had ever seen!

We spent most of a morning shuttling between stations on one train or another,

perpetually amazed at the grandeur and attention to artistic detail we found in the stations.  Here is a medley of our favorites, particularly those that celebrate peasant life in that wonderful style that has come to characterize Soviet art. 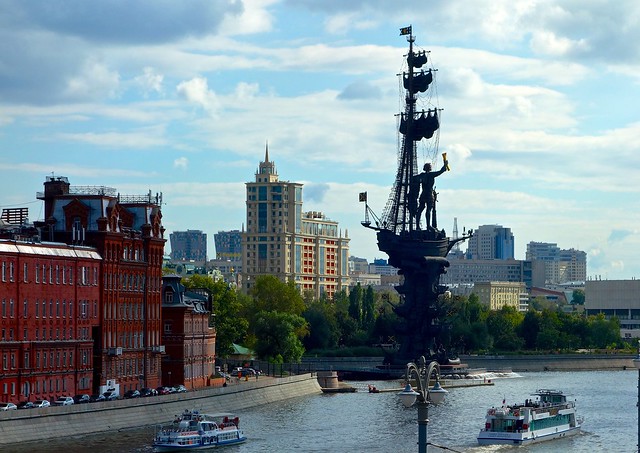