Nepal has always been primarily a Hindu culture rather than what most Westerners think of as a Buddhist one.  In many ways it resembles and reminded me more of India than what I would next encounter in Buddhist Tibet.  When the Chinese invaded and occupied Tibet, many Tibetans left their homeland and resettled in both Nepal and the Himalayan areas of India, established their own communities and were welcomed there by the Nepalese.  But Nepal remains overwhelmingly a Hindu country.

We arrived in Kathmandu during the Hindu celebration of Dashain, a 15 day holiday celebrating in very simple terms the triumph of good over evil, though it is much more complicated and tied to specific Hindu stories. Worshipers use a mixture of rice, yogurt and vermilion, called “Tika,” to mark their foreheads.  What this meant for us was that the streets of Kathmandu were uncharacteristically empty.  Most businesses and public buildings were closed, casting an eerie feeling over the streets.

Our bus effortlessly took us though the city to visit the enormous temple complex of Pashupati, the oldest Hindu temple in Kathmandu dating back to 400 B.C. A UNESCO world heritage site, it sprawls along the sacred Bagmati River and is comprised of 518 temples and monuments, mostly spared during the 7.9 magnitude earthquake in April of 2015.

This temple is dedicated to Shiva and a huge terrace fronts the other side of the river where cremations were going on. Cows, dogs, monkeys were running around everywhere.

Flocks of birds, throngs of barefoot worshippers, beggars and a grand cast of sadhus–highly photogenic ascetic Hindu monks–were all assembled and busy separating the tourists from their money.

The importance of the Bagmati River also lies in the fact that Hindus are cremated on its banks.  According to the Nepalese Hindu tradition, the dead body must be dipped three times into the Bagmati River before cremation, so that the reincarnation cycle is finally ended.  The chief mourner (usually the first son) who lights the funeral pyre must bathe as well in the holy river immediately after the cremation, and thus will be spiritually purified.

After the best buffet lunch so far on the trip at the Yak and Yeti Hotel, we boarded a plane for Pokhara, flying over the Annapurna range.  Everest even managed to peek out for a moment!

Early the next day, our bus took us the short distance from our hotel to Fewa Lake where we lined up and one by one and gingerly stepped into wee tippy canoes. Each boat had an oarsman who paddled us slowly over to a trailhead on the other side. On our way there, we passed a small island with a Hindu temple. Given that it was Dashian, it was covered with hundreds of worshipers dressed in their finest. We heard laughing, singing and could smell food and incense as we floated by.

The hike up from the trailhead to the World Peace Shrine on top provided panoramic views of the lake, valley, and city as well as the Himalayan range in the distance which unfortunately was shrouded in clouds.

The shrine is actually a Buddhist stupa and one of a series of shrines built by Buddhist monks around the world as places for people of all faiths to come together to celebrate and pray for peace.

We took an early morning flight from Pokhara back to Kathmandu. As we left the airport, I got this last photo of Everest above the prayer flags.

Patan is in the Kathmandu Valley across the Bagmati River from the city of Kathmandu proper, and dates back to ancient times.  It is also a UNESCO World Heritage Site. This is where we saw more evidence of the 2015 earthquake, although not as much as we thought we’d see. Durbar Square pictured below is where we saw the most evidence of earthquake damage. All the buildings on the left with scaffolding were either damaged or almost destroyed.

The rest of the photos are random shots I took while we spent the afternoon wandering around Patan.

We were in Patan during Dashami, a day elders put Tika  on the young ones and give them a blessing.  Here is a father applying Tika to his daughter.

Boudhanath Stupa dominates the skyline on the outskirts of Kathmandu. A close up of the top of the stupa is first photo in this blog. This ancient stupa is the largest in Nepal and the holiest Tibetan Buddhist temple outside of Tibet. Surrounding Boudhanath Stupa are streets and narrow alleys lined with colorful homes, Tibetan Buddhist monasteries, and shops selling Tibetan jewelry, hand-woven carpets, masks and paintings. The whole place was a feast for the eyes.

There were many people circling around the stupa turning prayer wheels embedded in the wall to the right.

And everywhere there was color and life!

Our stay in Nepal was too short to really do it justice, but was an effective introduction to what lay immediately ahead–Tibet!

Would you like to see a bit more of Nepal?  Click the photo below and off you go! 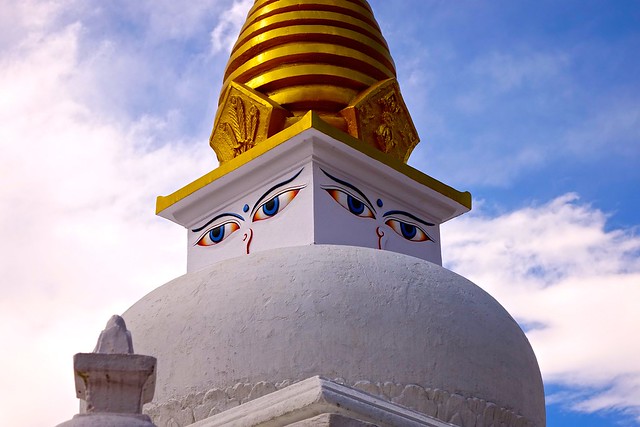