Home/Bonnie Does Bhutan
Previous Next

The photo above is of  Paro Dzong in Bhutan, a country I’ve dreamed of going to since it opened to tourism in 1974. It is geographically isolated, squeezed between India to the south and China to the north, and has long maintained a policy of strict isolationism to preserve its cultural heritage. It therefore limits tourism to what they call “low volume, high value.” In other words, it’s expensive to travel there. And yet, Bhutan captures people in ways that can’t be explained, and they feel strongly that they must go. I am one of those. How could I not want to visit a country that is a matriarchal society and that gauges its prosperity by measuring its Gross National Happiness, GNH, not it’s GDP? I have a friend who, after her divorce, sold her diamond ring to go to Bhutan and never regretted it. Fortunately I didn’t have to do that!

David was less enthusiastic about the trip, but fortunately good friends, Tony and Jeanne, were up for it. We decided to join a sixteen day, small group tour of twelve with Mountain Travel/Sobek to Bhutan, Nepal and Tibet. The packing list was formidable but in the end I got everything, including a laptop,  into a carry on and backpack.

We flew on this small airplane from Bangkok on Bhutan Airlines. There are only a few flights a day into Paro and for good reason. It has been described as “the most difficult commercial airport in the world” and has only one runway. Airplanes on approach pass by 18,000 foot Himalayan mountain peaks. That, plus the short runway which ends in a river, presents a double challenge. As a result, only a handful of airline pilots are certified to operate commercial airplanes there.

We were met by our local guide for Bhutan, Chiring, and our Sobek guide, Sanjay, who lives in Kathmandu and would be with us the whole trip. They immediately fetched our luggage and began lashing it down to the top of our bus. Take a good look at that bus. We would spend many hours riding in it over the next 5 days!

Once we were packed up, we headed off for Thimphu, the capital of Bhutan, making a stop along the road to see the Tamchog Lhakhang Monastery. In order to visit it, however, we had to walk across a swinging bridge, the one on the right in the photo below. The one on the left is the original iron chain bridge dating from the late fourteenth century and built by a famous Bhutanese bridge builder but no longer in use.

Below is a close up of the top portion of the Monastery, our first glimpse to the Bhutan we’d come to see.

After lunch in Thimphu, we headed to Memorial Chorten, a shrine built in 1974 in memory of the late King of Bhutan. The Chorten is held in great religious regard.  It was humbling and fascinating to sit on the side and watch worshippers circling the shrine in a clockwise direction, reciting prayers while spinning  prayer wheels.

Personally, I could have spent the rest of the day here but of course we had much more to see. So off we went to visit an enormous golden Buddha perched high on the hill above Thimphu and offering magnificent views.

Just avoiding a torrential downpour, we boarded our magic bus to visit a school that trains students to paint, sculpt and carve Buddhist artwork. We were impressed with these young artists, working hard to preserve their traditions. If that weren’t enough for the day, we next had a tour of a small weaving center. The textiles were simply stunning with colorful, complex designs and high prices to match.

On our last stop of the day, we arrived at Taschchho Dzong just as the sun was setting. It’s Bhutan’s administrative and religious center. Dzong architecture in general is massive in style with towering exterior walls surrounding a complex of courtyards, temples, administrative offices and monks’ accommodation. Tashichho Dzong was bullt 1641 but rebuilt in its present form in 1965 by the Third King of Bhutan. All done in traditional fashion, without nails or written plans, it was consecrated in 1969 and is quite a sight to behold. Note the the men lined up in the photo below with their kimono style robes called a Gho. They wear long scarves when visiting Dzongs and other administrative centers. The scarves vary in color, signifying the wearer’s status or rank, with white signifying that they are commoners.

What a first day in Bhutan. Early dinner and to bed!

Thimphu is at 7,600 feet, and we were scheduled for two hikes on our second day in Bhutan. The morning hike was a steep, hour-long climb to Cheri Goemba, a monastery constructed in the 1620s by the founder of the Bhutanese state. It houses relic stupas and is considered to be one of the earliest monasteries in Bhutan. By the way, I’ll be using the word stupa a lot in this blog and the easiest explanation I’ve found is “…usually a dome shaped structure serving as a Buddhist shrine, customarily housing sacred relics associated with the Buddha or other saintly persons.”

Our hike up was steep as promised, but well worth it. The monastery was richly decorated (sorry, no photos allowed inside), and is a major teaching and retreat center. After visiting the main sights, we were slipping our shoes back on when we heard chanting and gongs. Following the sounds, we rounded a corner and found the source. Inside a small room, we could dimly make out about 15 monks sitting in candlelight, praying for one of their teachers who had recently died. Our Bhutanese guide asked if we could join the ceremony, fully expecting them to say no. Instead, they welcomed us. We quickly filed in and sat cross-legged on the floor, arranging ourselves around one side of the room. The monks then went back to chanting, ringing bells, hitting the gong, drum, wafting incense. This was a rare gift. We were profoundly touched and turned out to be a major highlight of the trip for me.

In the afternoon, Sanjay said we would go on a “mostly level hike”. However, in order to get to the hike, we had to climb a “hill” (aka, mountain) and the mostly level was all up and down. Sanjay is from Kathmandu so in the future, whenever he described a hike to us as mostly level, I translated that to a good workout.

At any rate, the hike gave us an opportunity to get into the countryside and have some wonderful views of Thimphu. I took many photos of our ramble around the hilltops but am including the one below as my favorite. This woman had such a radiant smile and we both stopped along the trail to look into each others eyes for what seemed like a long time. Fortunately she let me photograph her so I have this happy memory.

In the evening we had a special treat. We were invited to the home of the owner of our Bhutanese tour operator. The whole family was there to greet us, grandmother to young children. After cocktails, they took us one by one to a special room jam-packed with Bhutanese traditional clothing and jewelry. Once dressed up, we took this photo so now you can see my whole tour group, plus our guide, Sanjay, in the front. We were treated to a homemade meal served in style by this exceptional family.

We got an early start for a three hour, tortuous drive over the mountains on a road that was mostly packed dirt and deeply potholed to Punakka, winter seat of the highest lama in Bhutan until the 1950’s. On the way, we stopped at the village of Yawakha for lunch and to walk along narrow pathways through rice fields to a rather unique monastery, Chime Lhakhang.

It was built in 1499 for the “Mad Saint” who was known for his unorthodox ways of teaching, which to some may simply sound bizarre or shocking. The explicit paintings on the walls of the village houses can be embarrassing to many, but are seen as esoteric and ritualist symbols. Chime Lhakhang is a fertility pilgrimage site for those wishing to bear children. Households around the shrine hang wooden phalluses around their necks to bless the home, ward off the evil eye and promote harmony among family members. As a result, the local village walls are lavishly adorned with these members, as you can see from the photos below.

We spent the afternoon at Punakha Dzong, one of the oldest and largest Dzongs in Bhutan and one of its most majestic structures. All the Bhutanese kings have been crowned here. It’s fortuitously located at the confluence of the Mo (Mother) and Pho (Father) Rivers and still the residence of the Chief Abbot of Bhutan where he and his entourage of monks spend the winter.

We drove back the same awful road from Punakha to Paro. Fortunately, the travel group was compatible and conversation was as interesting as the scenery along the way.

After checking into our hotel in Paro and having lunch, we went to Paro Dzong. Built in 1644, it has a lavishly painted, wooden carved interior with about 200 monks residing there. An interesting side note: Bernardo Bertolucci’s film, “Litte Buddha” starring Keanu Reeves and Bridget Fonda was filmed there in 1995.

We spent the rest of the afternoon walking around Paro and watching an archery match. Archery is the national sport of Bhutan. The archers must wear traditional robes and knee-high dark socks but are allowed to use imported metal compound bows, rather than the traditional bamboo ones.

I loved the audience comprised of cows, monks, local businessmen and a few of us tourists.

The target is way at the end of the archery green. They are amazingly expert shots.

We rounded off the day with a little shopping in Paro before returning to our hotel.

About this time, we were getting “dzonged” out and were ready for a change and we got it at Taktsang Monastery or as it is known in English, Tiger’s Nest. A temple complex precariously perched off a granite cliff at 10,240 feet and built into the rock face, Tiger’s Nest is a cultural icon of Bhutan. The first time I saw a photo of it, I knew I had to go but was never quite sure if I’d really do the long, uphill climb from 8,500 feet to the top. In fact, from our group of twelve, seven made it all the way to the monastery. Good for them! I rode a sturdy little horse up a track through a blue pine forest festooned with prayer flags and prayer wheels to a teahouse, the rest stop that marks the halfway point.

Hearing the monks’ etherial chanting floating from across the valley, watching the mists brushing the monastery, then under it, and then totally disappearing was mesmerizing. It was an amazing day that I will never forget.

So that’s the end of the Bhutan tour. Next blog will be on Nepal In the meantime, if you wish to see how our Bhutanese guide tied his traditional scarf before entering a holy place, please have a look at this video:

And if you still want to see more photos of Bhutan, please click this photo and it will take you to more: 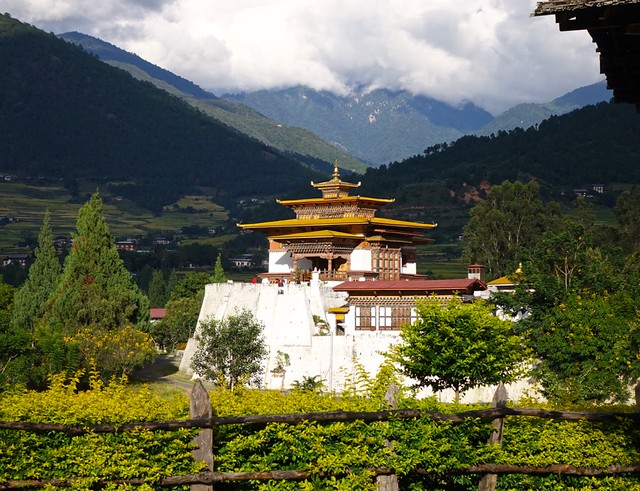